Home Environment Is The Arctic Warming Up Faster Than We Thought?

The Arctic is once again at the centre of geopolitical and strategic discussions, mainly for one reason — climate change — and it is imperative to act now, write Virginijus Sinkevicius and Boris Herrmann. It is imperative to act now and act together because what happens in the Arctic, doesn’t stay in the Arctic. and as a professional ocean sailor and ocean activist just returning from the Vend e Globe race, a single-hand regatta around the planet in just 80 days.

The Arctic region is warming twice as fast as the rest of the planet. We are probably only a few decades away from the definitive disappearance of the Arctic summer ice cap. The negative feedback of the melting polar ice cap may become the first irreversible (and accelerating) tipping point in the earth system, bringing us closer onto a slide towards a hothouse Earth.

The impacts of climate change are felt around the world: rising sea level, changes in climate and precipitation patterns, increasing severe weather events, an alarming increase in forest fires across the planet, and loss of biodiversity.

And in some regions of the planet, it already causes social and economic disruption such as climate migration or decreasing agricultural yields.

Protecting and safeguarding the Arctic requires keeping global warming below 1.5 C. The must finally admit that The foundation of our civilisation is a stable climate and rich biodiversity.

The European Union is currently revisiting its Arctic policy and has invited all those concerned to join the conversation.

The Arctic Sea borders three continents. Regional and international coordination are therefore indispensable to protecting the Arctic marine environment. The EU already contributes significantly to the activities of the Arctic Council, such as its Regional Action Plan on Marine Litter, and will continue to do so. The EU is therefore promoting international cooperation at all levels.

To give you an example, the EU was one of the first signatories to ratify the Agreement to Prevent Unregulated High Seas Fisheries in the Central Arctic Ocean and is now playing a leading role in establishing science cooperation under the future Joint Program of Scientific Research and Monitoring. The EU also co-organised the Second Arctic Science Ministerial.

Likewise, through the EU-PolarNet, we are bringing together Arctic research expertise and infrastructure from across the globe in the biggest research network focussed on the Arctic.

EU services like Galileo — for satellite navigation — and Copernicus — for earth observation — are providing international researchers with essential information on climate change and its impacts in the region. With our forthcoming strategy, we intend to provide an outlook for the years ahead and outline common solutions to make our Arctic policy fit for the future.

Because what happens in the Arctic does not stay in the Arctic. Especially those who put the ocean at the centre of their lives. About 150 days of each year I spend on the high sea.

I just finished the around the world alone and non-stop Vend e Globe Race which took me through the Southern Ocean. In these remote locations, I experienced the impacts of climate change on our Oceans first-hand.

Protecting them is paramount to our survival on earth and the Arctic region plays a vital role in maintaining balance within the Oceans.

I initially experienced the Arctic region in 2015, when I became the fastest sailor on the planet to sail with only wind power through the North-East Passage in the Arctic region. Ironically this was only possible due to record low ice levels, and we used this trip to raise awareness for the severe reduction in ice levels in the Arctic. 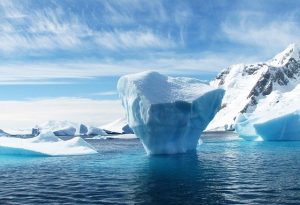 We have already lost 50% of the Arctic ice. To stop this from happening there should be the strictest highest standards in place to protect these regions and indigenous people from exploration, climate change and exploitation.

Our partners in logistics have all signed the Arctic Pledge stating that they will not use this shorter Arctic route which will soon be commercially viable due to climate change, instead, they would rather work to reduce the speed of climate change.

In July last year, I sailed single-handed in a race from France to the edge of the Arctic Circle and back. Like many of us are noticing each day, we are living in a time when soaring temperatures in summer and winter are becoming the norm, but they shouldn’t. I live on the ocean and experience the storms and weather patterns that frequent the seas.

However, we are noticing changes, we are finding that storms are lasting longer and are occurring more frequently or at unusual times of the year, I am encountering vast mounds of seagrass taking over in areas where I previously saw none and I see less wildlife than expected.

Onboard my vessel Seaexplorer, I carry an ocean laboratory, so I can constantly measure ocean CO2 levels on all my races.

The data is showing us that we need to work as a unified group to seriously reduce our global CO2 footprint, we know that the ocean has a limit where it can no longer continue to absorb man-made CO2 and that this is having a negative impact on all life within her.

It is well known that soaring temperatures will leave places uninhabitable, that melting ice caps will release harmful trapped gases and cause sea waters to rise.

I am directly impacted by these changes in the Ocean, with warmer summers, ice drifts are happening sooner, so my race route may become longer or due to a hurricane, I may have to reroute my course. Our joint vision for the Arctic is that of a clean, safe, secure, sustainable and prosperous region.

This must be achieved through cooperation, onshore at the political negotiation tables and offshore within the entire ocean community.

Global Warming Is Changing The Arctic Climate According To Scientists